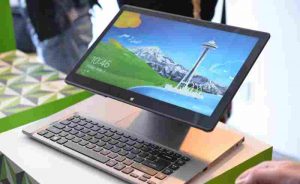 Let me tell you the story of God’s Computer.

In the summer of 2013 the laptop that I owned pretty much bit the dust. Since I really need a laptop when I travel and when I visit clients, I needed to get a replacement. But, my financial situation was in its usual pitiful condition. I was talking to Debbie about it and we both agreed that there was no way to fit a new laptop into our household budget.

So, Debbie said, “You need to pray about it and tell God you need a laptop.” And that is exactly what we did, right then and there.

The very next DAY I received two vouchers in the mail from eMachines Computers for a class action settlement that I knew nothing about. The first computer I bought was an eMachine, back in 1999. It had been a pretty lousy machine and the store where I bought it actually replaced it twice because it would not work correctly. I think I kept the machine I ended up with for about a year before I bought something else.

Anyway, each voucher was for $500 toward a refurbished computer of my choice. There was a settlement store page and I kept checking back until I saw the one I needed – an Acer Aspire R7-571. The cost, including tax and next day delivery, was $999. I had those two $500 vouchers that miraculously showed up in my mail the day after we had prayed and told God that I needed a new laptop. It was completely paid for, we did not have to pay a penny.

When it came and I powered it up for the first time, I had to give the computer a name during the initial set-up. There was no doubt what I was naming it. It was “God’s Computer.”

And whenever I was logged on to a public network, there was “God’s Computer” showing on the user list. And I had the joy of telling why it was so named several times as a result.

God is still doing miracles today! I’ve got more stories to tell about that! But now you know the story of God’s Computer.