It’s been a minute since I last posted an update on my weight loss journey.
Last September I made a major commitment to change things drastically. During the month of August 2020, my weight had once again hit 360. I knew I had to do something. The time for messing about and being serious for a few months and then sliding for a few months was over. I started to cut back a little on my food consumption, and when I went to the doctor in September, I had managed to get it back ‘down’ to 353.

I talked with the doctor and we made a plan. It was time to take drastic steps and we scheduled a gastric sleeve surgery. Contrary to what I’ve heard some people say, this was not an easy way out. It certainly isn’t a “magic bullet” but rather a new tool in my nutritional toolbox. There was going to be a lot of hard work involved. I would be hitting “reset” on all of my old eating habits. I would have to exercise regularly. I’d have to confront the fact that I was addicted to food and to unhealthy choices. And I knew that I would need to depend on God’s strength every day; actually, I’d need to consciously trust God every minute of every hour of every day. I was living, not-walking proof that my own strength and determination alone just wasn’t enough.

As I started this new journey, I set several goals for myself, to keep me focused on what I am working for.
1. I want to be healthy and around for my Beautiful Wife
2. I want to be able to actively engage with my grandchildren
3. I want to get below 300 pounds for the first time since around 2001
4. I promised my Wonderful Daughter that I’d lose 100 pounds before her wedding this December
5. I wanted to actually be able to walk and complete a 5k

I started doing a little bit of exercise, but truthfully, if I walked out to the mailbox and back, I felt like I had done my walking for the day. I bought a pedal exerciser that I can use on a table and work with my arms. This allowed me to burn calories and build up my endurance. And it started to make a difference. I had my surgery in March and I had managed to lose about 25 pounds by that time. After the surgery, I became even more determined to walk for my exercise.

At first, I struggled to get to half a mile, but as I continued to walk every day, I soon was able to do a mile with no trouble. Within a month I was able to walk 2 miles without any problems. Then it climbed to 3 miles, and then 4 miles. I’m now at the point where most days I walk 4 miles. About once a week I try to stretch it to 5 miles. So far, I have hit 7 miles in one walk, but I am trying to build my consistency and stamina by keeping it to 4 miles regularly. I’m working on my pace now, and on a good day, when the humidity and air quality aren’t bad, I can get my pace down to 18:30 per mile. I’d say a normal pace for me is 20 minutes per mile.

A couple of months ago I read that the Moraine State Park Regatta was going to be having a 5k as part of the weekend activities. When I realized that 5k is 3.1 miles, I knew that a 5k was well within my walking ability, so I signed up for my first 5k! The 5k was this past Saturday, August 7. It went mostly good. The trail was a lot more “rugged” than I had figured and I swear the first 10k of that 5k was straight up the side of a mountain. Most of the trail had jagged tree roots across it and about 3/4 of the way thru one of them grabbed my ankle and I took a hard tumble. But I finished! GOOOOAAALLLL! 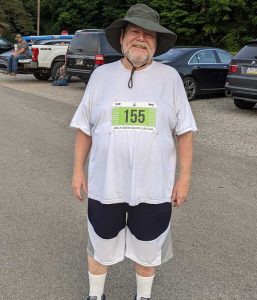 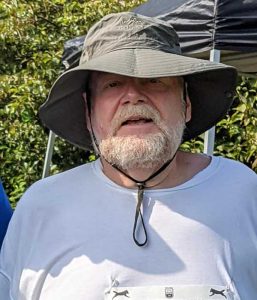 I’m now signed up for another 5k on September 3, and I have committed to one in October and one in November. From what I can tell, all of these will be on much better trails/paths, so I imagine that each one will be a little easier still.

As for other goal updates, I broke through the 300-barrier the first week of May and the 250-barrier is well within sight. Unofficially, since last August I have lost 94 pounds. Officially, from my first weigh-in with my doctor, I have lost 87 pounds.

Watch out 100-pound-goal, I’m about to kick your butt!