Recap of My Weekend at WordCamp Kent 2019

I build and manage websites for small businesses, churches, ministries, a race car team, an author, and a college professor. The software that I use is called WordPress. I’ve been using WordPress since it was first released in 2003 and it has grown to the point that now, roughly 1/3 of all websites on the entire www are made using WordPress. WordPress has an amazing community of users, designers, and developers which offers support, encouragement, and in many ways, a true sense of ‘belonging’.

That community happens in many ways – social media (Twitter, Facebook groups), Slack “teams”, local MeetUps, and at WordCamps, which are casual conferences for WordPress users. I’ve become a big fan of WordCamps because even though I am a shy introvert, I have managed to step out of my comfort zone (to a degree) at WordCamps. I have met some really great folks at WordCamps, many of whom I now am proud to call “friend”. I’ve learned a lot too, which helps me with my own use of WordPress and also helps me with business improvements. 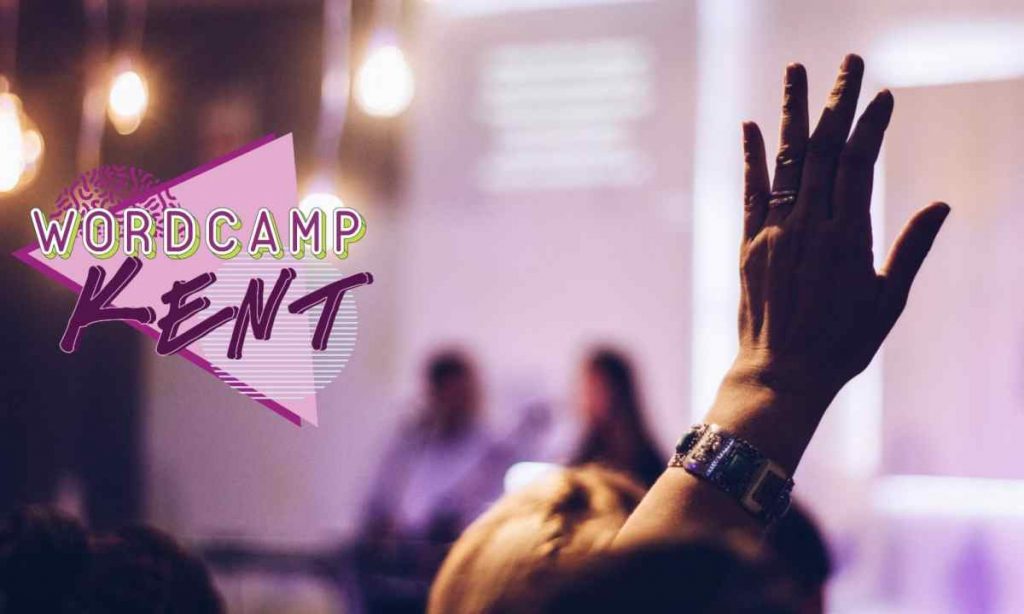 WordCamp Kent, held at the Kent State Hotel and Conference Center in Kent, Ohio, has become one of my favorite WordCamps and is now a yearly highlight for me. The weekend of June 14-16 was WordCamp Kent 2019, and for the third year in a row, I had the privilege of speaking at one of the sessions. You can find a recap, slides, and expanded text of my talk on my Oyler Creative business site.

What I want to talk about here is the community that I experienced this year at WordCamp Kent. 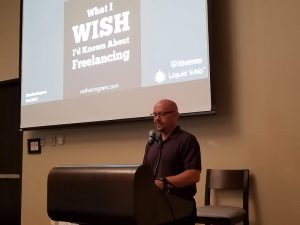 One of the things I was most excited about going in, was that one of the other speakers was Nathan Ingram. I’ve known Nathan online for quite a few years, and although we were supposed to have been at the same events in the past, it had never worked out. So finally getting to meet Nathan in person was definitely a highlight. I consider Nathan to be one of my mentors in the WordPress world; he is an excellent teacher and he also is an outstanding business coach.

Also great was that there were two other Pittsburgh area speakers this year and I already knew Rene and Lee from previous WordCamps and both are in an active Slack group that we all belong to. So it was great seeing them as well and we spent a good amount of time hanging out together with Nathan. And also meeting Chris Edwards for the first time in person was great, as Chris is in another Slack group. As it turned out, all five of us (Rene, Nathan, Lee, Chris, and myself) all spoke in the same room on the same day. Just one of those neat little things that I find super interesting. 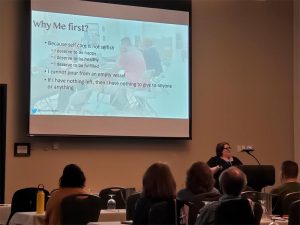 My good friend Michelle Ames was the keynote speaker this year so I knew that was going to be incredible, and her talk “The Care and Feeding of the WordPress Community: Me, You, & Us” lived up to and surpassed my expectations. I first met Michelle at a WordCamp Buffalo and quickly saw that she was a great speaker and a very interesting, vivacious, and talented woman. We have been at quite a few WordCamps now, and it is always a pleasure to reconnect with Michelle. In fact, tomorrow I am going to be interviewed by Michelle for her new podcast, WP Coffee Talk. That should be a lot of fun; I just wish I had a Grateful Dead mug to show off on the show.

Of course, it just wouldn’t be a trip to WordCamp Kent without reconnecting with Angela and William Bergmann. I’m not positive, but I think Angela and William were the first people I met on my very first visit to WCKent. We seemed to connect right away and now we stay in touch throughout the year on social media and always look forward to WordCamp to reconnect in person again. 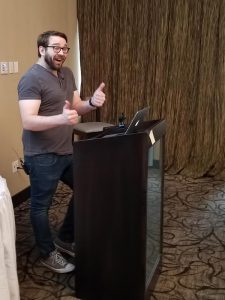 Another speaker that I have gotten to know over the last couple of years is Steve Grunwell. He is a developer, and to be honest, when I sat in on one of his talks it was way over my head, but that is because he is a great developer and I am most definitely not, so it sounds like another language to me, but Steve is so friendly that it easy to have with him. Over the last couple of years, I have also started a tradition of getting at least one ‘awkwardly goofy’ photo of Steve (which really isn’t that difficult to do) and we continued the tradition this year.

The organizing team at WP Kent was fantastic this year, as they always are. Led by Megan, David, Sarah, Amanda, and Brittney, everything was well planned and the weekend was great. They also had a super team of volunteers who made sure the weekend went great from registration to room moderators, to video operators. This team knows how to make a person feel right at home.

There are usually three “tracks” at WP Kent (each track is a common theme) and there is one room for each track. One of the great things about this WordCamp is that the event is in the hotel that most out-of-town folks stay at, so it is very easy to get to. And each of the rooms is part of a large ballroom that has dividing walls that slide open for the main ballroom (used for the keynote and for the on-site lunch) and slide closed to form the three rooms. Having all three room side by side makes so much easier to get from one session to another, especially for those of us that have a harder time being mobile.

On Saturday I stuck to the room that I was speaking in, which was the Freelance track, but on Sunday I took in a session from two of the three tracks. There were a couple of talks in the Developer track that I really wanted to catch but they were at the same time as another talk that I really wanted to catch. Fortunately, all of the talks were recorded and will eventually be on WordPress.tv so I’ll be able to catch those talks that I missed. Saturday’s tracks were WordPress 101, Freelancers, and Developers, while Sundays tracks were Users/Business, Developers, and Marketing & SEO.

Saturday had lunch provided on-site and it was a great Taco Bar. Who doesn’t love a great Taco Bar, right? On Sunday, there were four Breakout/networking groups that went to a different local restaurant for lunch. I was going with the Freelancing group but unfortunately, the restaurant that we went to, right across the street, didn’t have the room (or desire) to seat us all, so the group went walking to find another place. (Kent is a great little town with an amazing business district that has many incredible little stores and restaurants, all in a couple of square blocks.) Since it was raining and my back is making it difficult for me to walk I went back across the street to the hotel restaurant and there I found Michelle, John, Amanda, Carla, and Alessandro so we had our own networking group.

It was an outstanding weekend and I could go on for quite some time, but I wanted to share just a bit about my experience there and hopefully share effectively just what being part of this WordPress community is like. And hopefully, these photos will also convey a bit of the joy that is WordCamp Kent.

To get a sense of what WordCamp Kent was like as it was happening, check out the hashtags #WCKent2019 and #WCKent on Twitter. 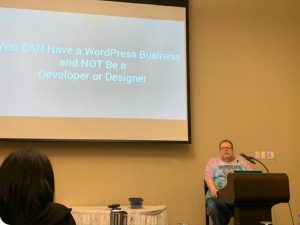 Here I am, delivering my talk at WordCamp Kent

Nathan Ingram giving the first of two talks he had for WordCamp Kent. 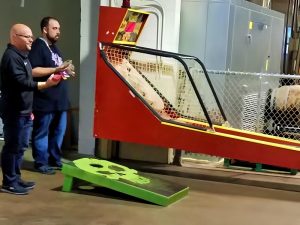 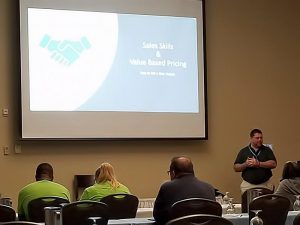 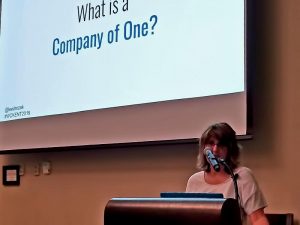 Lee Drozak giving her talk on being a Company of One. 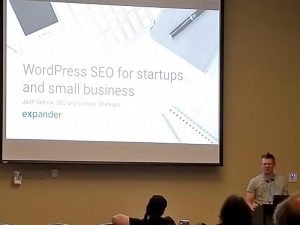 Josh Gellock talking about SEO for startups and small business 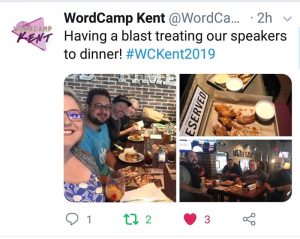 The WordCamp Kent Speakers Dinner was outstanding and a wonderful time of socializing, reconnecting with old friends, and meeting new friends. 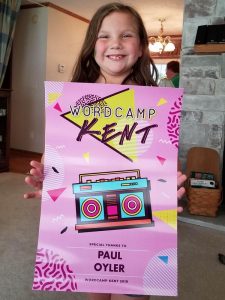 My beautiful granddaughter holding the incredible poster, designed by Sarah Yoder, that was the speaker gift at WordCamp Kent. 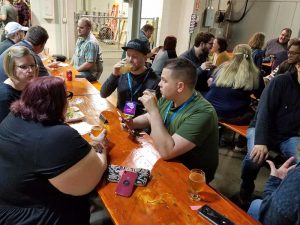 More fun socializing during the WordCamp Kent After Party. 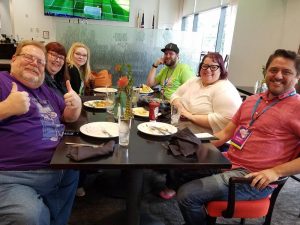 This was our spontaneous networking lunch at WordCamp Kent. 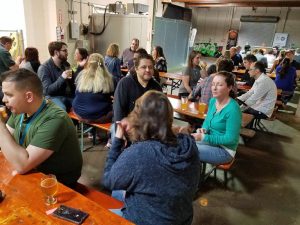 Some of the fun socializing during the WordCamp Kent After Party. 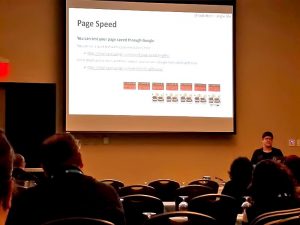 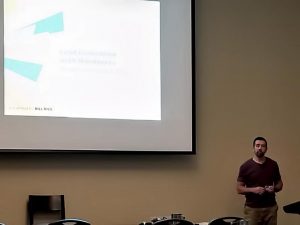 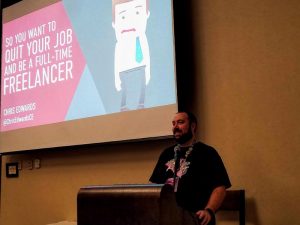 Chris Edwards talking from experience on quitting your job to be a full-time freelancer.