The Story of my Struggle with Weight and Weight Loss

I have a serious weight problem. I have struggled with it for most of my life, but I’ve usually thought something like, “I’ll deal with it, eventually.” Or, “That’s just the way God made me, so I’m good with that.” 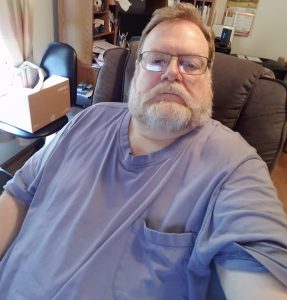 But I have to admit it – I am morbidly obese. If I don’t do something it will kill me. God did NOT make me morbidly obese, my choices of what to eat and what and when to exercise (or not exercise) were just that, my choices. I have made bad choices and right now I am reaping the consequences of those choices.

I’ve tried several times to get my weight under control, with varying degrees of success, always followed by an extended period of failure. I’ve never publicly shared what my numbers are because I have always been embarrassed and ashamed of those numbers. But since this is my online journal, and I want anyone who reads this journal to know the real me, I am going to share those numbers here.

I’m 5 foot, 9 inches tall, which makes the following numbers that much worse. At my highest point, I tipped the scale at 425 pounds. I ended up in the hospital with congestive heart failure when I was at that weight, which is the only reason I know that weight because I didn’t have a scale that went that high. That was a wake-up call for me and I started walking fairly regularly after I was released from the hospital and I lost about 80 pounds.

But then my momentum stopped. Instead of pressing forward, I once again reverted to bad habits, emotional eating, and ‘grazing’ late at night – eating bits of junk food because I was bored and it was something mindless to do. I gained back another 20 pounds or so, and then just sort of hovered in neutral for several months. Eventually, I started walking again and trying to cut back on junk food and I lost a little bit more.

I never did get below that 300 mark, which to me is a major goal. I think 2001 was the last time I was under 300 pounds. so that 300 represents a definite barrier that I want to crush. But as close as I was at 310, I didn’t get any lower and I slowly started walking a little less and then even less until I wasn’t walking at all again. And of course, my weight started creeping upward once again. It hit around 340 and I knew I had to do something.

What I did was something I had never imagined myself doing; I joined a gym. And it felt good working out. The gym had a trainer that helped me set up a basic routine so I at least knew a little bit of what I was doing. I started losing again and was pretty consistent in going to the gym. Then my new stepson, who has to be in absolute peak condition for his job, came to visit us for a week or so, and he started working with me at the gym and really took my workout to another level. And while he was there with me every day, encouraging me, and showing me how to do new things, I did great and my enthusiasm was at an all-time high.

I carried that enthusiasm for a couple of weeks after he had gone back home and then slowly it started to wane. My chronic back pain began to increase and I chose to go to the gym less and less until I had quit going altogether. It is true that I have a chronic back issue, and there are days when the pain is so bad that I can barely move, and I let that excuse take over my life and I quit trying.

I did discover the Whole 30 plan and lifestyle and I read the book It Starts With Food. (I will get a small commission if you purchase that book through my link.) And it did make a big impact on me. I changed my eating habits completely. I did the Whole 30 diet two times in a row, making it a “Whole 60” for me. And the changes were incredible. I lost enough weight to once again hit that 310-pound mark. But I still couldn’t manage to break through that “300 barrier”.

I really enjoyed eating the food on the Whole 30 plan and eating that way showed in my blood test numbers. My blood sugars were down, my cholesterol was down, my headaches practically disappeared. But, as usual, I slowly drifted away from that. My willpower just couldn’t seem to keep me on track. Even though I had been feeling great, I just did not continue to do what I knew was right. (And that is going to be a key point, as you will soon see.) 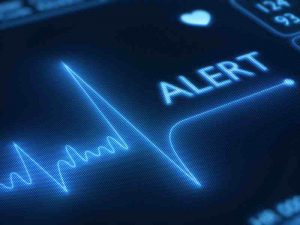 And then, on August 31, 2017, I had a serious heart attack. That should have been the wake-up call that I needed to get back on track. But it wasn’t. During my ‘downtime’ resulting from the heart attack, my back issue became worse. Without going into too much detail, the very base of my spine is not attached where and how it is supposed to be and it moves around. It is seriously painful and it soon became the overriding factor in what I did or didn’t do.

Because I was hardly doing any activity, my weight began to rise. A year after my heart attack, I hit 380. That was at least a slap in the face as I absolutely did not want to ever cross the 400-pound mark again. I did begin to adjust what I was eating and even though I still wasn’t all that active, I did begin to take breaks from working at the computer and I would walk around the house. Occasionally I would also ride the incumbent bike that I have in my office, although not nearly as often as I should have.

My weight came back down to around 360 and stayed in that vicinity until about two months ago. Around two months ago I had an encounter with the Holy Spirit in a way that I had only experienced once before in my life. I suddenly saw Light being shone on what my real problem has been. All of my efforts had been just that – my efforts. And my efforts to lose weight have never been enough. And they never will be enough. And I saw with absolute clarity that what I do to my body by eating and exercising, or not exercising, was a spiritual issue for me. Please note, I’m not saying this is the case for everyone, I am only saying that I realized that for me, this was true. I knew what was right for my body, and therefore my health, and I knew what was wrong. And left to my own ‘will power’ I continuously chose what was wrong.

And the Holy Spirit chose this moment of clarity to remind me of James 4:17, “Remember, it is sin to know what you ought to do and then not do it.”

And there it was. This was a spiritual issue for me. I knew what I should be doing, and I was choosing to not do it. And in my renewed relationship with Jesus, through the Holy Spirit, I knew that what I had was never going to be enough. At that moment I confessed to God that I knew I was choosing to do wrong and I was trying to fix the (for me) sin problem by my own power. I completely surrendered myself to God and asked Him to fill me with the Holy Spirit’s power to attack this weight issue. The Holy Spirit is always enough.

I’ve started walking again. It’s not a lot, but for me, it is a major step forward, and every couple of days I am adding another 100 yards or so. And while I am walking, I am spending that time praying and worshiping God. I know it is not going to be easy, and the Holy Spirit is not some kind of genie that is going to make the weight just go away. But now that I have identified the true issue (for me) I can know that with the Holy Spirit’s power, I can defeat this stranglehold that the enemy has used to crush me for years. There is so much tied up in my weight issue – self-esteem, depression, bad health, shame. It’s been a breeding ground for so many of the enemy’s attacks.

Now I know some of you may not understand this, some may think I’m nuts, and some of you will know exactly what I’m talking about. But I want everyone who happens to read this to know what is going on in my life. And I’ll be updating this every couple of weeks or so, sharing victories – and setbacks. I know it’s not going to be easy but I have confidence and I want to share my experience with anyone who cares to follow along.

So today, October 7, 2019, I am starting my public journey of weight loss at 355 pounds. Come along for the journey if you’d like. And if you are the praying kind, I’d certainly appreciate your prayers. And I’d definitely welcome encouragement at any time from anyone.